ARISS stands for Amateur Radio on the International Space Station. Read below how you can use any VHF handheld transceiver to receive signals from the ISS!

Recently, I have been engaged with satellite communications. It involves using amateur radio equipment to transmit and receive signals to and from satellites. One may get started in this hobby with just a simple stock radio (no modifications, no upgrades) coupled with a smartphone decoder app (like Robot 36, which you can easily download for free). Some build antennas for improved reception and transmission. In this article, we will start with the very basic, which is receiving signals from the International Space Station (ISS).

The International Space Station is an artificial satellite in orbit on Earth at an altitude of about 400 km. On board this satellite is a set of amateur radio equipment that can be used to transmit voice, or encoded data. The amateur radio equipment in the ISS serves as the astronaut’s ultimate backup communication system to Earth. To maintain the effectiveness of the radio equipment, they perform scheduled tests. During these tests, they transmit audio in SSTV format—a recording that lasts for about two to three minutes, in which a series of tones can be heard that when decoded by an appropriate program, it will produce an image. This is the same method used by various lunar spacecraft during the Apollo missions to send images from the moon to Earth.

To receive SSTV images, you need a radio, a decoder app, and a schedule of the satellite’s pass. Any radio that can be tuned to 145.8 MHz can be used. I am using a Yaesu FT60, but just about any radio would work. To decode images, I use the smart phone app Robot 36 (you may DIY a connector to send audio from the radio to the microphone input of the smartphone for better decoding, but this is entirely optional as the built-in microphone of the phone is good enough for decoding purposes). To find out about scheduled passes, I use the smart phone app Heaven’s Above and ISS Detector.

Here’s a short video demo on how I used a two-way radio and a smart phone to receive Slow Scan Television (SSTV) images from the International Space Station (ISS) as it orbits the Earth at a height of about 400 km. The transmission was received on February 9, 2019, at around 8 am local time, from Bacoor City, Cavite.

Here are two sample SSTV images received during the last scheduled transmissions of the ISS (February 2019). Both images were received with just a stock FT60 (no modifications) and decoded with Robot 36.The first one shows what a clear image looks like, the other one shows an image with a loss of signal (a number of factors could have caused this).

Images received are then forwarded to the Amateur Radio on the International Space Station (ARISS) group for analysis. As a token, you will be awarded with a certificate for successfully receiving and decoding a signal transmitted from the ISS! 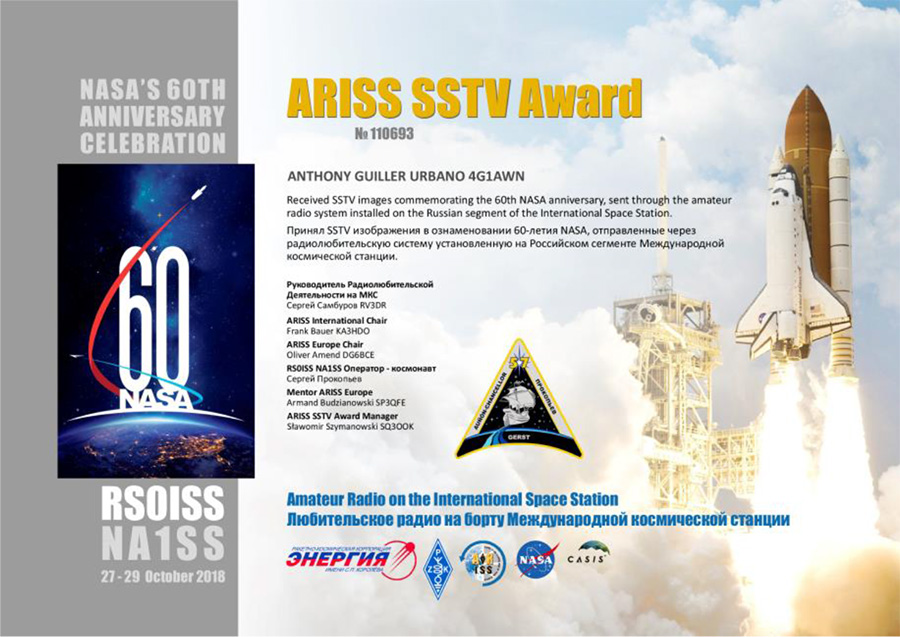 Through amateur radio, you can engage in various activities such as receiving images from the ISS, use various satellites as relay stations, bounce a signal off the moon, or talk to the astronauts on the ISS (as it orbits 400 kilometers above)!

In my next article, I will discuss how you can transmit signals to various low-Earth orbit satellites, and use them as a repeater for your two-way radio, to relay your signal and reach fellow enthusiasts anywhere in the country, and even nearby countries such as China, Singapore, Malaysia and Japan.

Related link: About Night Sky in Focus
To view all posts on amateur radio, click here.